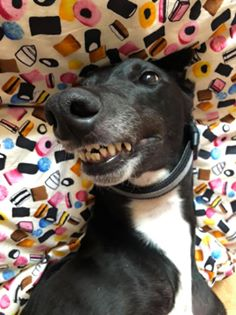 In early April 2019 I was delighted to take home my first greyhound from Dunton after having walked 4 boys at the Trust that I had viewed on the website and wanted to meet. I visited twice and decided on Adriel, now called Bentley as he was the most affectionate to me. When I took him home I could not have been more excited! I was all prepared with raised food bowls and a large bed, both of which turned out to be far too small and were quickly replaced with higher and bigger items! Finding a bed a greyhound will actually fit on without some extremity hanging off it is still proving difficult even after quite a few different varieties, or maybe I just enjoy buying him things, as I’m sure many GH owners will agree.

I knew there would be teething problems and I was prepared for that, as no dog, especially an ex-racer from kennels was going to be perfect from the outset. However, there turned out to be different problems than I had envisaged. He is a fairly laid back dog and he didn’t have any difficulty in staying downstairs on his bed the first night or any nights after that in fact. I quickly learned, anything kitchen counter height, was fair game and a box of eggs, my cooked dinner and a large Belgian bun became fairly immediate casualties. I do not have any photo frames on window sills or books on coffee tables etc as they are far too tempting. I had to laugh and take a picture of him when he shredded my barely touched book “Greyhounds for Dummies” and he seemed very pleased to have decorated the lounge with it. He had very few accidents in the house although “Vanish” was high on my shopping list for a couple of weeks.

My biggest surprise was, that I seemed to have a fairly successful ex racer, that didn’t want to walk. Or rather, he would walk but then put on the brakes when we were furthest away from home, turning a 20 minute walk into 2.5 hours of frustration and being my first doubt that I may have made a mistake, as that was adding stress to my day not enjoyment at this point. That was about three weeks after first taking him home and I am very glad I persevered and arranged walks with other GH owners and he was a lot better “in a pack” at first. It happens rarely now but I know from experience that he will stop if he’s not sure about something, so we stand still, if, strange dogs, (not sure what his criteria is on this!) walk by and then he happily trots on. We avoid parks with bouncy dogs running after high speed balls and play grounds full of children. It seems it is excitement or information overload and he grinds to a halt and won’t move in any direction. I do however always have with me bribery in the form of a box of cheese which seems to do the trick if required.

I have now had him 6 months and cannot imagine not having a large black dog draped somewhere around my house (usually with a tongue poking out) or magically appearing behind me, from what would appear to be a deep sleep, moments after opening the fridge or rustling a cheese wrapper. He has a fetish for shoes and if excited can be found looking for a trainer to steal. He really is the most laid back, gentle, sweet, funny dog I could have hoped for and I feel lucky ‘he picked me’ when I went to choose a dog from Dunton Greyhound Trust.

Our thanks to Cara for sharing her experience with Bentley.

I’m sure you think it most peculiar to come onto a website about rehoming greyhounds to be met with a serious (health) warning! But a warning I feel obliged to give you and it’s a warning about owning a greyhound.

No, none of the above:

I need to warn you that greyhounds can become addictive!

There, I’ve said it, and not even in a whisper!

The Oxford English dictionary defines being addicted as:

“(informal): Enthusiastically devoted to a particular thing or activity.”

I realise I am confessing to my own weakness, as I am guilty, as charged! But dear readers, I know of whispers between owners (whilst rattling tins outside of supermarkets) that they also share this dark secret!

I have tried in vain to analyse why this addiction is so common, after all there are so many other wonderful dogs out there to pull at the heartstrings (beautiful beagles, magnificent mutts, and tenacious terriers) who also have their devotees.

And I’ve had different dogs over the years (a Jack Russel, Springer Spaniel, rescue GSD cross) and loved them dearly, but there is something about the greyhound…….

But what is it about these hounds that can get such a firm grip on your psyche? Could it be the placid and trusting nature, or the endless patience and gentleness with children?

Or what about the interesting juxtaposition of the supreme athlete of the canine world, who also has the ability to sleep 22 hours a day? Or maybe the endearing, if somewhat weird, habit of placing one shoe from each family member onto their bed. (How can this even be a common behaviour across the breed?)

To be frank, I have no idea why the addiction is so common! But, just like Pringles, you can’t just have one greyhound! Well, you can, but be warned, the urge to have more can just overwhelm you! Which it did to me, and not just once, but twice! And having three greyhounds did help me develop more dexterity (have you tried weaving in and out of 12 long spindly legs in repose, while holding onto a hot mug of tea?)

But compared to some people I am a mere amateur! Having 6 or more hounds is not unheard of!

Some common signs of greyhound addiction:

OK, the last one really does make me sound like I may have to seek help!

So, if you are viewing the website as you are considering offering a forever home to one of these wonderful hounds, I would wholeheartedly recommend that you do. You won’t regret it.

But just be mindful of the hidden dangers! And in the longer term if you do succumb to the obsession, just remember there are plenty of us out there to support you.

So there you have it! Don’t say I didn’t warn you!

Pipps Hill Farm, Pipps Hill Lane North, Basildon, Essex. CM11 2UJ
Tel: 07852 734 958
Kennel visiting hours
Please note:- All walking has been suspended.
All viewing of our hounds is now by appointment only. Please call before you visit the kennels

Please call for any homing enquiries.